Over the years, Maui has attracted hundreds of artists who draw inspiration from the island’s raw and natural beauty both on the land and in the ocean.

Today, several local artists have made it big thanks to their hard work and rare talent in capturing the spirit of the Islands. Here are seven of our favorite Maui artists:

Christian is regarded as one of the premiere marine artists of modern time, alongside Robert Wyland. His placement and contrast of color and light create incredible intensity and drama, not to mention mesmerizing beauty.

He was raised on Maui, where he grew up surfing and teaching himself art. His works use a “Two-Worlds” style where whales, dolphins and fish are seen both above and below the surface of the water.

“The thing about art and surfing is: a wave is like an empty canvas. I try to do something new and different with each; every time.” 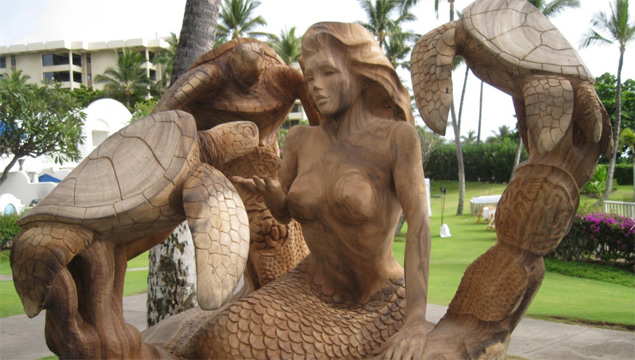 Originally from Connecticut, Dale Zarella started sculpting at the age of nine. He moved to Hawaii in the 80’s, where he continues to create exquisite wood and bronze sculptures as well as paintings.

One of his best known works is the statue of Saint Damien of Molokai, which was more recently duplicated and presented to Pope Benedict XVI in commemoration of Father Damien’s canonization.

Sherri Reeve moved to Oahu when she was just six, where she was heavily influenced by the rich, vibrant colors of the islands. Primarily self-taught, Sherri grew up drawing and eventually working in various jobs as department store display coordinator and graphic artist.

After a stint on the mainland, Sherri built up an impressive clientele list including Pier One, The Nature Company and Portal Publishing. She relocated to Maui in 1989 and eventually opened her own gallery in Makawao. She works primarily in watercolor as well as sculpture.

Kit first started moonlighting as a night security guard in Maui after moving from Michigan in 1993.

One night, he was assigned the task of watching over a valuable painting artist by another notable Maui artist named Jan Kasprzycki. Having heard of Kit’s artistic aspirations and viewing his portfolio, Jan recommended him to The Village Gallery.

By 2000, he was a self-sustaining artist, now working in a variety of media including oil, pastel, drawing and photography. 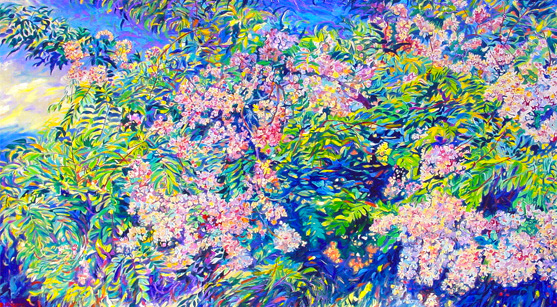 Jan lives in upcountry Maui, where he creates beautiful oil paintings of the surrounding flora, landscapes and various ocean and cityscapes.

He was born in Rhode Island and raised in Southern California, and studied at the Art Center in Los Angeles. Jan moved to Maui in 1976. Says his website: “His works appear to possess a vitality of their own.”

Like Jan, Curtis also lives and draws inspiration from upcountry Maui, in Kula. He grew up in Oahu and moved to Carmel after high school to study art with his father, artist James Peter Cost.

After returning to the Islands, Curtis enjoyed 12 successful at the Village Galleries in Lahaina before opening his solo gallery in 1984. Over the past 38 years, he has painted some of the most sought-after works of Hawaii land and seascape art in the world.

“My work is essentially about place and timelessness…preserving the old Maui through renderings of the way it once was, and the way it remains underneath the surface of change,” says Curtis. 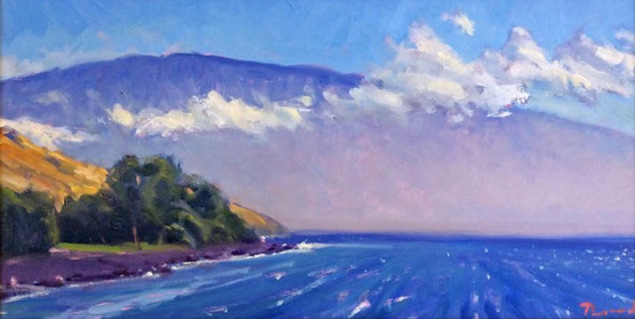 Macario immigrated to Hawaii with his mother in 1961 when he five years old. They joined his father who came arrived earlier to work on the sugar plantations. At 13, he became the first and youngest recipient of the Lahaina Arts Society Art Scholarship, going to study art at the University of Hawaii on an art and tennis scholarship.

Macario’s paintings focus primarily on Hawaii’s plantations, its workers and the surrounding landscape. He has won several top awards from Hawaii to New York and Massachusetts. His paintings are in permanent collections throughout the state of Hawaii.